LOSCAM, ASCAP and Thinxtra partner to connect the supply chain 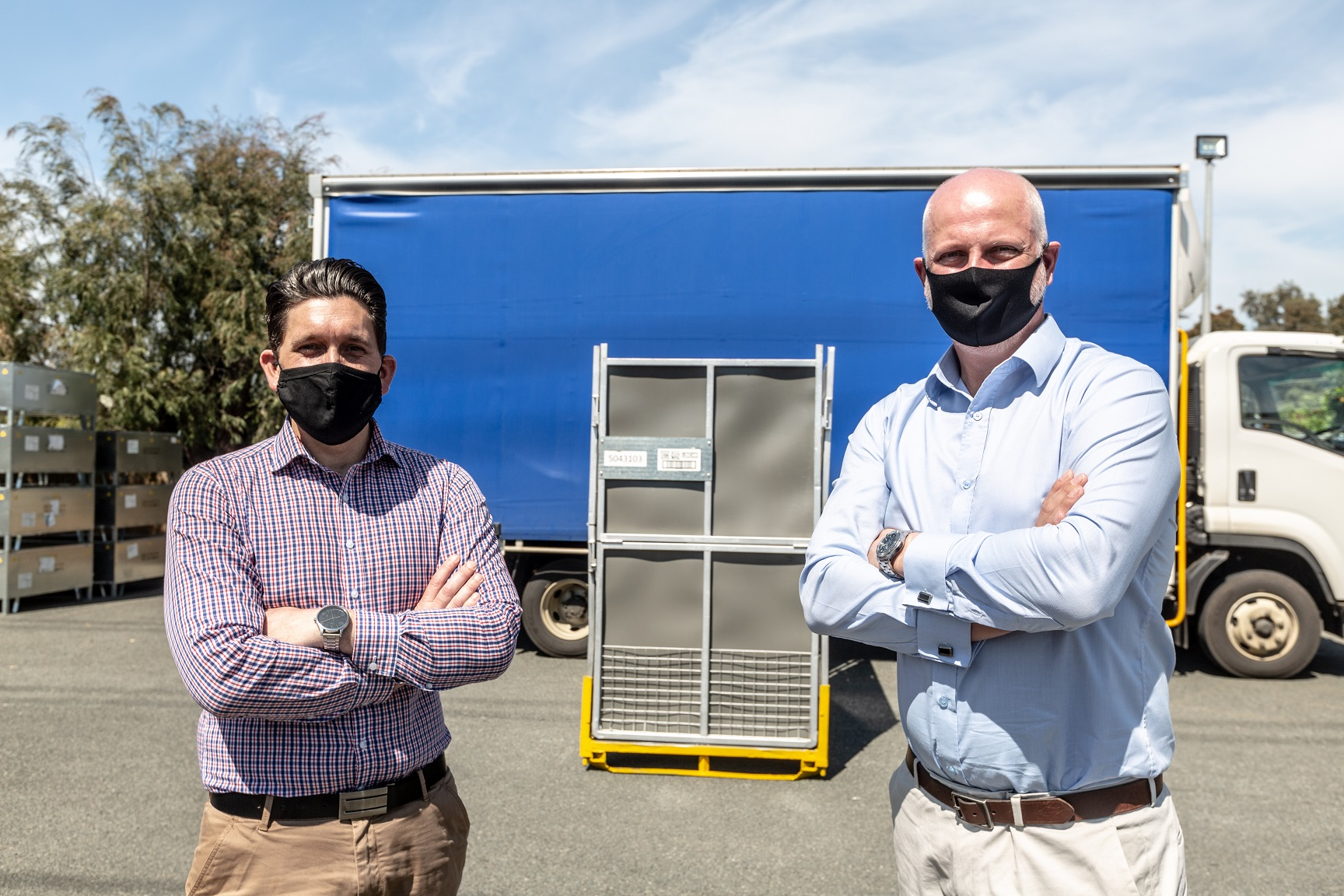 After a decade of trialing expensive, complex and inefficient track and trace solutions, leading Asia-Pacific pallet and returnable packaging solutions service provider Loscam has deployed Thinxtra’s IoT solution. MHD sits down with the parties involved in the project to find out more.

Loscam’s track and trace journey started more than 10 years ago.

"We have a large volume of high value assets in our supply chain supporting a broad customer base with an extensive product range. We therefore knew that being able to track and trace these would present all parties with some significant security, cost savings and efficiency gains." Daniel Bunnett, Executive Vice President - Australia and New Zealand at Loscam says. In addition to well-known services as a pallet hire company, Loscam also hires out high value assets including intermediate bulk containers (IBC), stillages and foldable bins for use in supply chains.

When Daniel and his team first started looking at capabilities around tracking these assets, they were underwhelmed. “The business case just wouldn’t add up. The only options on the market were bulky devices with poor battery life and operating on an expensive network such as 3G,” he says. A few years later, RFID started to take off and again Daniel considered this solution for Loscam but found that it was simply not fit for purpose. “RFID is only as good as the last scan in or out and the market needed a more real time solution for true value to be realised,” he says.

Loscam operates a truly dynamic supply chain. “An average trip for our equipment can pass through five or six customers and can be out in the field for up to six months or longer. Our operations might see a pallet issued in Melbourne, Victoria and receive it back from Tully, North Queensland or even further across the Asia Pacific region,” Daniel says.

When a supply chain stretches across so many locations throughout a long period of time, visibility is crucial. “You need visibility at all times, not just at the point it’s been scanned,” Daniel says. After revisiting track and trace solutions more recently, Daniel was pleased to find that the technology had moved forward. “When we first connected with Thinxtra, we knew that the 0G network was going to be a huge opportunity for us,” he says.

Loscam is working with Active Supply Chains Asia Pacific (ASCAP), a leading-edge Australian Supply Chain Management company as one of it’s first clients to adopt Loscam’s Track and Trace solution . This project involves the Australian East Coast transport operation for one of the world’s largest automotive manufacturers. ASCAP rents Loscam’s Gpak stillages on behalf of this OEM customer in order to move its spare parts and accessories across the network of dealerships in Australia.

“When we got started on this project, we noticed that our customer was using 30 per cent more units than we predicted we would need to run this operation and we were perplexed,” Craig Stanford, Director of ASCAP says.
In the first several months of running the project, Craig and his team quickly realised why extra units were being used. “Within three months of running this contract,we lost track of more than 100 units. Each unit costs $2000, so that quickly became an alarming amount of value to lose,” Craig says.

It took nearly 10 weeks to recover the assets and a lot of manpower. “We had lost assets in Brisbane, Sydney, Melbourne, Adelaide and everywhere in between. We were getting on the phone, visiting dealers, trying to track these assets down manually. Eventually we managed to get them all back in the supply chain, but it took a massive amount of work,” Craig says.

After Loscam fitted the assets with Thinxtra’s IoT track and trace solution, the leading automotive provider is now able to gain a significant cost saving through ASCAP being able to reduce the amount of assets on hire in the network.
"Now we have a reliable track and trace solution, we only need to run a fleet at 70 per cent of the levels we started with, and we have stopped charging our client for the extra 30 per cent. This adds up to many tens of thousands of dollars savings to our client each year.,” Craig says.

Caine Groves, Operations GM at ASCAP also comments on the additional costs of chasing lost assets that go largely undocumented. “Whilst we can say that the static value of the asset is $2000, there is the additional loss of all of the extra costs of finding the assets. Our operational teams can spend a large amount of time and effort re-tracing previous locations, meeting with the network, educating the network, time out of the operations and phone calls. All of this recovery takes a lot of administrative resources as well as costs on accommodation and travel,” he says.

As well as the benefits of cost-savings, all parties involved in the project also commented on the positivity in the change of behaviour of many businesses across the supply chain who may have previously misplaced assets. “There are significant advantages in renting packaging solutions which is a model adopted as best practice across the globe. However, it does require a certain discipline in ensuring the assets are managed accordingly. If this process is neglected, our customers do have the risk of increasing equipment shortfalls that add potential cost and liabilities. These circumstances are frustrating and certainly not the kind of conversations you would ever want to have with your customers,” Daniel says.

According to Craig, it took the industry about nine months to really understand that ASCAP could now pinpoint exactly where the assets were. “But once this happened, it was a positive change in the type of communication we were having with the dealerships. No one wants to have the conversation based around saying ‘I think you have lost my asset’. So this new technology allows us to pinpoint exactly where the asset is, how it arrived there, and that conversation is much easier and more partnership based,” Craig says.Previously there was a lot of guesswork about where certain assets in the supply chain were. “We ran a manual in-and-out book and made many estimates. Like most of us in the supply chain services industry we never really knew where our fleet was in the network. But now with our trackers communicating three times a day exactly where they are, we can work much more efficiently and accurately,” Caine says.

“The effort to track the assets manually is quite disproportionate to the return we receive for managing them on behalf of our customer, so this solution has been a real winner for all stakeholders,” Craig adds. For Craig, the asset only needs to communicate three times a day. “This level of communication suits us. It gives us the feedback we need and it will also alert us if we have any battery or location issues,” he says. All parties are very pleased with the results. Craig says if they continued to lose assets at the rate they did before, he would hate to think where they would be if they didn’t have this technology.

An Opportunity to Go Further

For Daniel, this is just the beginning of the journey and he says while the early statistics around cost-savings and limiting losses are impressive, it’s about more than just the tracking. “This is really powerful data that can help shape business processes, reduce bottlenecks, manage delivery times, assess risk, compliance, the opportunities are endless,” he says.

There are also opportunities to move forward with sustainability commitments, a strong focus for Loscam. "We feel that by having this kind of traceability and accountability of a rental fleet, we will be able to convert a lot of our customers who are hesitant to use reusable packaging." Michael Winter, Customer Solutions Manager at Loscam says. Daniel says that Loscam has well and truly met its initial purpose of reducing loss across its high value assets, and he is excited to see IoT solutions being used across more assets in Loscam’s fleet. Working closely with their clients, Loscam continues to deploy IoT trackers that will be connected to Thinxtra’s 0G Network. “Loscam has been trading for nearly 80 years and this will clearly be one of the most exciting projects undertaken in our time. It takes our business to the next level and we are excited to be working with our strong and capable technology partner Thinxtra,” Daniel says.

Craig also speaks highly of Loscam and its commitment to innovation. “For Loscam to come to the table with this solution is very mature. They make money whether we lose assets or not. So, for them to invest in this initiative is really a positive thing for the entire supply chain,” he says. "There are many opportunities in the supply chain around high value product and asset tracking, so being able to implement the first phase of the IoT solution in the operational environment of a customer and demonstrate efficiencies has been very rewarding. It also has let some of our team responsible for these assets sleep better at night." Caine adds.

Both Caine and Craig see real opportunities for all stakeholders and users of Loscam IBCs into the future through location transparency, increased control and better decision making. All parties are in agreement that this is a game-changer for the industry and excited to see where this technology can provide further efficiency gains and cost-savings.

Watch the Webinar video: How IoT solutions for asset tracking deliver value to the supply and logistics industry